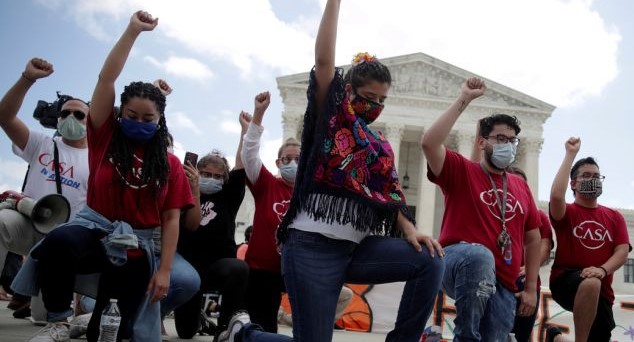 Thousands of Americans took to the streets on Juneteenth, the day when the end of slavery is commemorated.

Many events are cancelled due to the corona crisis, so activists organize other activities.

The memorial day coincides with ongoing protests against police brutality and racism. In New York, hundreds of protesters gathered at the Brooklyn Museum.

In many cases, they wore face masks and had brought along plates with texts such as Black Lives Matter.

One of the most prominent manifestations took place in Atlanta, where the emotions ran high after the death of Rayshard Brooks. A police officer shot that black American in the back in the parking lot of a fast-food restaurant.

Instead of the usual Juneteenth parade and music festival, this time a march has been held in the city. Participants went to the Centennial Olympic Park. Local media reports that thousands of people were on their feet.

The National Juneteenth Observance Foundation says that in some places, car parades are also planned. People then drive slowly and honking in succession. More activities, such as lectures, are also taking place via the internet.

An event with thousands of participants is also expected to be held in Tulsa on Friday. A notorious racist massacre took place in that city in 1921.

President Donald Trump had intended to hold an election meeting there on Friday but moved it to Saturday after criticism.

UN: Countries Must Bring Back Children and Women From is Fighters