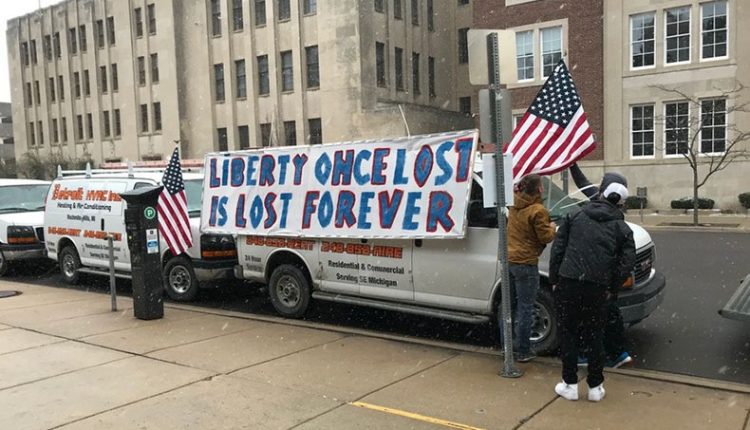 People in the US are Protesting Against Lockdown for Corona Measures

In recent days, people have been taking to the streets in many US cities to demand the end of anti-coronavirus measures.

It is a heterogeneous mixture of weapon fanatics, the extreme right, but there are also hardly any hidden links with the election campaign of President Donald Trump. He made no secret on Twitter of his sympathy for the protest movement.

A car trailer of lockdown protesters came to a halt today in Denver, Colorado, when two uniformed and masked nurses blocked the road and stood for a long time, much to the ire of the protesters.

The latter has been on the streets for days – sometimes also armed – and here and there are Nazi symbols and flags of the Confederacy (the southern slave states during the civil war 1861-1865). However, mainly American flags also flutter, and there are a lot of red MAGA hats from Trump supporters.

That protest is noisy and striking but by no means general. Each time several hundred activists demand the end of the lockdowns and restrictive measures. They believe that their freedoms are being violated and that they are living under the “dictatorship of the government”.

While there will also be many people who fear they will fall under the lockdown without livelihoods, yet there is a transparent organization behind the protest movement that is not accidental or spontaneous.

Incidentally, the Washington Post newspaper receives a recent poll in which 70 percent of Republicans (President Trump) and 95 percent of Democrats indicate that lockdowns should be maintained for the time being.