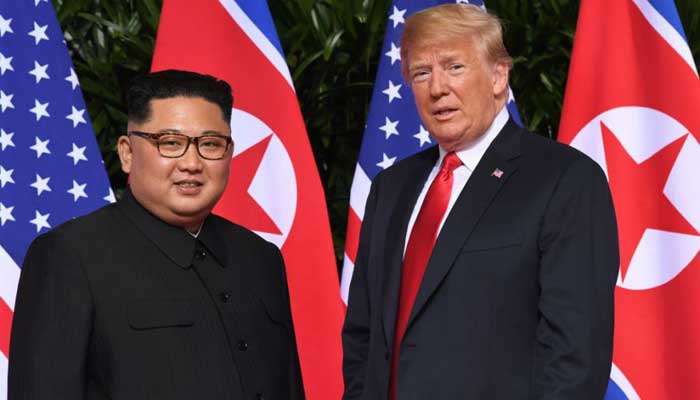 Kim Jong-Un Accepts Trump’s Invitation to Visit the US. Kim Jong-un has accepted an invitation from US President Donald Trump for a visit to the White House. The North Korean leader states that it is essential that North Korea and the United States call a halt to the hostile attitude towards each other.

The meeting Tuesday with US President Donald Trump was the first step.

When the meetings take place in the US and North Korea will be discussed later.

According to the EYE News, both leaders would “gladly” accept the invitation, but it is waiting for an “opportune moment” for Donald Trump and Kim Jong-un to meet each other.

Kim sees the meeting in Singapore on Tuesday as a good first step and hopes for a change in attitude towards each other.

“We must stop annoying each other and the hostile military actions against each other,” Kim said during the conversation with Trump. In doing so, Kim emphasised that both countries must commit to a better mutual relationship.

Kim wants both his country and the US to prevent each other from being confronted by hostile actions and statements in the future.

And that requires measures to ensure that this does not happen, according to the North Korean dictator who did not come up with concrete actions.

According to KCNA, Trump would have “understood” this and made a promise to Kim to stop joint military exercises with South Korea for as long as talks between the US and North Korea are ongoing.

Declaration of intent
Trump was rather pleased with his meeting with Kim. “The Korea War has never ended, it will soon end, history has proven that enemies can become friends.”

The American president and his North Korean counterpart signed a letter of intent after their meeting, in which the North Koreans promised to bring about “entire nuclear disarmament of the Korean Peninsula” in the long term.

In return, the US offers North Korea “security guarantees” and better diplomatic relations. According to North Korea, Trump also assured to cancel the sanctions against the regime in Pyongyang.

Specific
The letter of intent contains few substantial agreements about the implementation of the plans. It is not clear how the US and North Korea will sort their diplomatic ties out.

Trump pointed out that there is already a lot in the statement and more information will follow soon. “Kim is on his way to North Korea, and as soon as he gets there, he will start working on denuclearisation.”

According to Pyongyang’s statement published via KCNA, not much left on the denuclearisation of North Korea.

Also reported, that Kim and Trump recognise that everything has to go step by step and also emphasise that both sides should take these steps.

“Only then will peace, stabilisation and denuclearisation of the Korean Peninsula be possible,” reports Pyongyang.

Check
Trump confirmed that he would check if Kim keeps to the agreements. Also would be required more supervisors for this. Who would work closely with the North Koreans? Other countries will also remain involved in the process.

“In this process, we work together with South Korea, Japan and also with China, although this is happening on a smaller scale.”

Although suggesting that the sanctions against North Korea be phased out, Trump states that it is essential to stick to existing penalties for the time being.

Trump said over the top: “I did not think we would get that far at this summit, but it certainly requires a follow-up.”