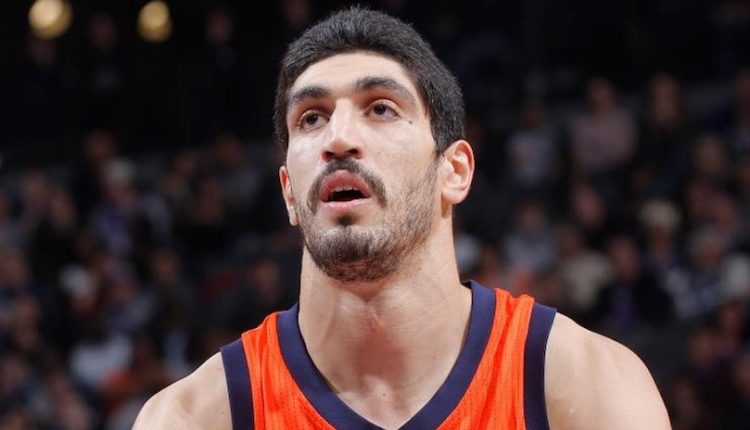 The American basketball league NBA is often a platform for political messages. The Turkish player Enes Kanter has his shoes full of it.

After the Boston Celtics’ remarkable 130-108 win over title favourite Los Angeles Lakers, it was again mainly about the shoes of Enes Kanter, the more than two meters long centre of the Celtics. His red shoes, bearing the flag of China, were full of words and pictures.

An image of a kneeling LeBron James, star player of the Lakers, with money bags behind him. A caricature of Chinese President Xi Jinping was also on display. Kanter’s other shoe read, “Are you still researching and reading yourself in?”

His action had its origins in 2018. The Houston Rockets played in China at the time, including against James’ Lakers. On Twitter, Rockets director Daryl Morey wrote: “Fight for freedom, stand behind Hong Kong”. As a result, the games were cancelled, and LA Lakers players and staff were held at their hotel.

The NBA lost several Chinese sponsors, and China’s CCTV stopped broadcasting the North American basketball league. However, James has a $1 billion contract with Nike, and his shoes are made in China. He responded: Morey was not well informed about the situation in China. It led to much criticism of the always politically outspoken James.

Kanter sneered at James on Twitter last week: “Money over morals for King James. It’s disgusting how athletes pretend to care about social justice. They really shut up and keep bouncing a ball when China says this. Have you read up on the slaves who make your shoes, or is that not part of your research?”

Contrary to many European competitions, political expressions in American professional basketball are not prohibited. In fact, NBA boss Adam Silver previously encouraged the players to use their platform. They have been doing it emphatically since last year to bring Black Lives Matter to the attention.

Kanter mainly focuses on China. But, all season long, he has been causing a stir with his protest shoes against the Winter Games in Beijing: ‘No rights, no Games’. And ‘Free Uyghur’ against the treatment of Uyghurs. About Nike shoes, made by slaves in China. And a statement that Taiwan is not recognized by China belongs to the Taiwanese people.

Outspoken political activism is no stranger to Kanter. He attended Izmit schools in Turkey, affiliated with the Gülen organization, which Turkish President Erdogan sees as a terrorist movement. Kanter has a personal relationship with founder Fethullah Gülen.

Kanter began criticizing Recep Tayyip Erdogan in 2013, following a corruption scandal involving people from the Turkish government. The now 29-year-old top athlete called Erdogan the Hitler of our time on Twitter. In 2018, his father was jailed for five days for being part of a terrorist organization. Since then, the basketball player can hardly communicate with family and friends in Turkey, afraid that the conversations will be overheard. In 2017, Ankara did not renew his passport and received a Turkish arrest warrant for membership in a terrorist organization. He has been a US citizen since June of this year.

James reacted to Kanter’s shoes after the game against the Boston Celtics. “He’s always trying to use my name to create an opportunity for himself,” said 36-year-old James. “As a man, if you have a problem with someone, you have to go to that person. He walked past me in the hall and said nothing.”