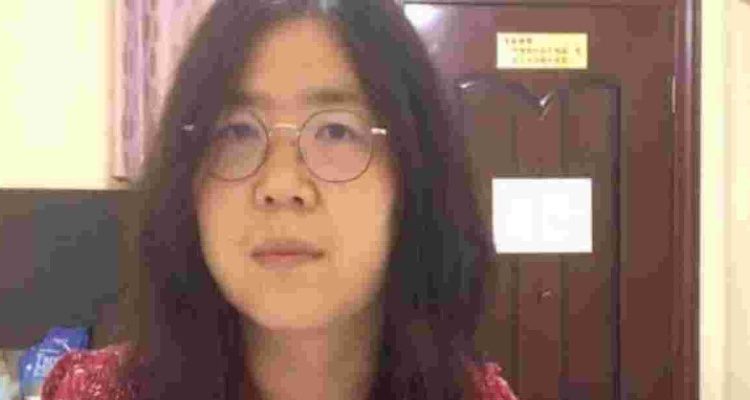 A Chinese citizen journalist is in danger of dying if the government doesn’t release her soon. That’s what her family and various organizations say.

After reporting on the start of the coronavirus pandemic in Wuhan, Zhang Zhan was sentenced to 4 years in prison. In protest against that verdict, she started a hunger strike.

In February 2020, Zhang Zhan travelled to Wuhan, the then epicentre of the pandemic, to report on what was going on in the city. Zhan recorded videos in which she openly questioned the approach of the Chinese authorities. Her social media included reports of arrests of independent reporters who had travelled to Wuhan with the same idea. The government did not miss this, and in May, the citizen journalist was arrested.

While awaiting trial, Zhang began a hunger strike in June 2020. Authorities forced her to eat. She was tied up and had to wear handcuffs and leg cuffs to get the necessary nutrients. Still, the much-weakened journalist appeared at the trial in December in a wheelchair. The judge sentenced her to 4 years in prison. The reasons: “seeking a fight and provoking trouble.”

While in prison, she continued her hunger strike, but at the expense of her health. According to the NGO Reporters Without Borders, Zhang can no longer walk independently. He wants to draw attention to the matter again with a Twitter call. At the moment, according to him, it seems that Zhan will not survive the winter.

Amnesty International joined the case and called on the Chinese government to immediately and unconditionally release Zhang. “Zahng Zhan was not allowed to be locked up in the first place, but now it appears that her life is hanging by a thread. The government must now release her so that her hunger strike ends and she can receive necessary medical care. If she dies in jail, her blood will be on the hands of the government,” the statement said.

Timmermans Halfway Through the Climate Summit: Should be Possible